By browsing our site you agree to our use of cookies. You will only see this message once.

Visit the 4 corners of the UK in 36 hours. This ride has been recognised by the IBA as a certified ride since it was first completed in April 2008 by John Phillipson on a Honda NTV650. The full rules and rider guidance documents are here. The Corners are as follows:

Note you don't necessarily have to do an End to End ride as part of this, do the 4 Corners in any order you wish. The ride has more than eight options to complete. The route is around 1400-1900 miles depending upon your starting point, as follows: 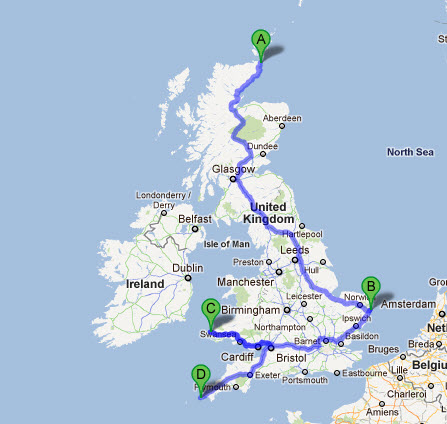 There are more options for this ride which will all be looked at. As long as all 4 corners are visited in the time allowed, go whichever way you wish.

Visit the 4 corners of the UK in 24 hours

This ride may only be attempted by those having successfully completed a SaddleSore or BunBurner ride.